I've made some knives in the past, but only kitchen knives of the Roman kind.

What I want to make is not easy, and I'm likely to fail.

It's because of the shape that I want to make a "Sykes-Fairbairn" WW2 fighting knife.

It has a famous past as it was the weapon of choice for the elite "commando" troops that raided the coasts of occupied Europe from 1940 to 1944.

One of my fathers uncles (my father was born in the Netherlands, but most of his family was German...), a German soldier guarding the Atlantic Wall, was killed by a commando, his throat sliced with this weapon.

The cruel practice of "silent killing" is told here by a former member of the commandos on camera at the National Army Museum.
(It's always fascinating to hear old soldiers talk... watch the look on their faces when they tell their horrific experiences...)

Anyways... I got the original drawings of an early version of this knife.

Since I worked for years with metal, I'm used to getting wounded now and then...
But not like this...

Ok, I got the great idea to convert a Ork Warboss ( the Black Reach one)  into a so-called "Big Mek"
That's a tech-guy....

I had to rip off his original head, and it had real sharp teeth!

Below some the Bad Ork and the proposed new head configuration.


I took some cheap but great simple styled little notebooks and made a present for my kids.

The right one is not lasercut, but laser-engraved, and the result is a more subtile effect, more suitable for artwork.
You can vary the dept of the engraving, and the power-output of the laser, to gain a darker effect.

I even engraved a brick with some words and a QR-code...

I plan to cut them on demand with all kind of text and namework...

The Skaven are one of the armies of the races that populate the Warhammer world.
They are mutated rats that are keen to wage war to any foe.

They are not very brave, and their battle motto is "Scurry away to fight another day!"

It's my own fantasy army and I like them because of their crazy looking medieval army with all kind of monsters and weird "Da Vinci" like machines.

All white rats are "leaders", darker rats are lower ranks...

I perverted "Mickey Mouse" for the reason I hate Disney, and so do my rats.
The sign on the banner is  one of the rune-like symbols from the Skaven script.

The rat and banner were painted by me with Citadel arcylic an Revell enamel paint.

Below part of my Skaven army


If you like to know more about the Skaven rats download the free book "Book of the Rat" by Garret Lepper at: http://www.freegamemanuals.com/pdfrpg/WarhammerFantasy-Skaven-BookoftheRat.pdf

Disclaimer:
I like to state that I only use or show Games Workshop figures in a way to promote the hobby and show my paintskills, and that all the pictures are taken by me, myself and I.

Warhammer and Games Workshop are trademarks of Citadel (or the other way around), a company that produces great figures to get rich and make the hobby impossible to afford by raising their prices time and time again in a way youngsters never could afford and stop buying and playing Warhammer. 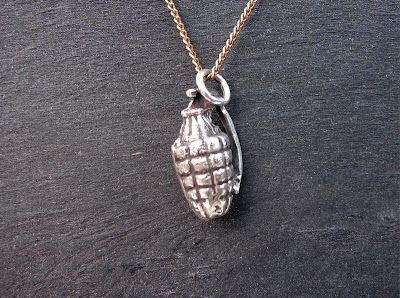 Well, and now something completely different...

I casted an Action Man plastic grenade from the sixties (yes, VINTAGE) in silver, but had to solder ("sodder" they say in the States)  both the striker lever and ring (safety pin ring) on cause I couldn't cast themat once...

This was a thingie I wanted to make for a long time now, and worked out really nice! 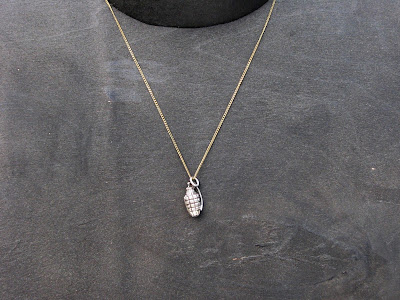